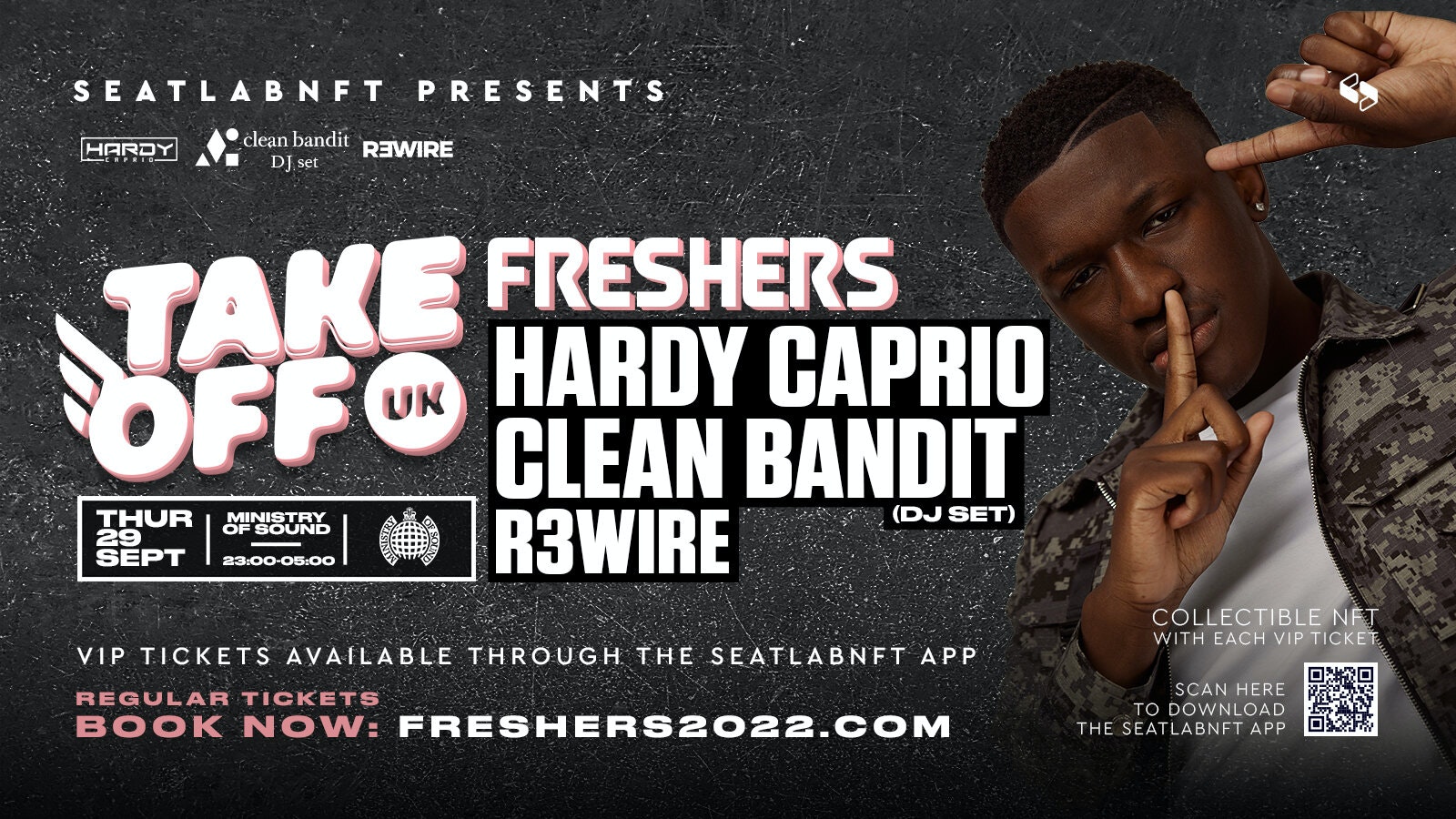 Ministry of Sound
18 &amp; over
12:30am
Share
Buy from Fatsoma
Buy from VIP Tickets

Standard Tickets are avaible on this page (OR click here: https://www.fatsoma.com/e/9x1z8dme/take-off-uk-freshers-rave-at-ministry-of-sound-hardy-caprio-clean-bandit-more )

Brought to you by some of the UK’s biggest nightlife promoters Take Off Festival is launching their 2023 festival with a string of HUGE parties in the UK, kicking off with the official launch in September in the 2000 capacity Ministry of Sound for London FRESHERS 2022! 🔥🔥🔥

Not only this, but Take Off Are Ready to announce dates in cities such as Manchester, Liverpool and Bristol, so watch this space for updates 👀

Thats right get ready for the UK’s hottest parties all kicking off on September 29th.. and what a night we have for you!

One of the UK’s BIGGEST artists right now, flying the flag for Croydon, Hardy’s rise to fame came in 2017 with multiple video releases shooting his viewership tenfold. Collabs over the years with the likes of DigDat, Wes Nelson, One Acen & more furthered his trajectory and with Platinum singles and tens of millions of streams under his belt Hardy’s performance is not one to be missed this Freshers!

With 4 Number 1 hits and ten top 10 UK Singles, Clean Bandit are one of the UK’s BIGGEST electronic music groups. From producing and directing their own Brit Award nominated Music Videos, racking up billions of Youtube views, Clean Bandit’s musical style is unmistakeable and we can’t wait for their exclusive DJ performance live at Ministry of Sound for Take Off this September!

Main stage killer-cam aka CLUB MTV’S DJ R3WIRE! – R3wire is the modern day DJ & producer with old school roots, a MTV Resident DJ & producer shutting down stadiums across the world. From award shows to festivals with crowds of up to 65k people, R3WIRE know’s how to rock any party. R3WIRE has released singles and remixes have charted around the world and on top of this, he has produced music for several major corporate advertising campaigns with companies such as Lucozade, McDonalds, Sky TV, emerge Energy drinks, MTV, and more.

Take Off Is All About The Experience and we’ve lined up some of the capitals hottest DJ’s to join you guys at our London event, including Capital’s DJ’s Martin2Smoove and Central Cee’s Official Tour DJ Andy P, straight from SHUTTING DOWN Wireless Festival!

PLUS YOU CAN EXPECT:

Press & Business Enquiries : hello@churchillmarketing.uk
For Question feel free to contact us on any of our socials!
Or for 24/H 📲Whatsapp Support: +447590834117

The Milkshake Freshers 2022 Lanyard is valid for this event